The World threat from over-population by rodents applies heavily to most species of rats and mice. We know of the diseases carried by both rats and mice, as well as the potential for passing on other diseases. Since these rodents are also commensal in habitat, that makes them a threat to humanity.

Not withstanding the fact that rats and mice are carriers of vector-borne diseases, they also consume huge amounts of human and animal foods.

Today, there is a drive by many states, moreover Nations, to eliminate certain poison baits designed to control rodent populations. Such actions make rodent control more difficult to achieve.

The EPA requires safety in rodent mitigation as well as efficacy. The length of time and expense that it can take to meet the accepted level of safety while also providing the efficacy that can meet EPA criteria, makes new toxin applications in bait form, more difficult to get approved.

The following articles refer to rendering male and, or female rats sterile or effecting their fertility:

In the case of females, ContraPest of SenseTech is able to reduce female fertility but also claims to reduce male semen production. The sterilant is formulated so as to attract rats to drink a liquid bait; but rats must continue returning to the bait for additional ingestion bouts to negatively affect fertility. Additionally, the liquid formula is not specie-specific as is another EPA bait formulation, known as Epibloc that is formulated by Gametrics Ltd. It is dispersed as a sachet. A single feeding causes male rats’ temporary sterility and further feeding leads to permanent sterility. Multiple consumptions brings about death to both males and females. Since males do not lose their libido, they continue to impregnate females and cause resulting false pregnancies. The outcome of the false pregnancy reduces the frequency of rat births while remaining a lethal poison when the bait is consumed in greater amounts.

An article on CentraPest is taken from a SenesTech report on California’s new prohibition of second generation anticoagulents as follows:

PHOENIX, Sept. 30, 2020 /PRNewswire/ — SenesTech, Inc. (NASDAQ: SNES), a developer of proprietary technologies for managing animal pest populations through fertility control, today confirmed that California’s AB1788 has been signed by Gavin Newsom, California’s Governor and will become law January 1, 2021. The California Ecosystems Protection Act of 2020 (the Bill) will prohibit the use of the four major Second Generation Anticoagulant Rodenticides (SGARs) commonly used in rodent pest control under many circumstances. SenesTech’s ContraPest, an alternative and complementary non-lethal approach to managing rodents through fertility control, has been proven in the field to be an effective and sustainable component of integrated pest management (IPM), and may be increasingly used to replace the SGARs.
Title: SenesTech, Inc. has developed an innovative technology for managing animal pest populations through fertility control as opposed to a lethal approach. The Company’s first fertility control product, ContraPest(R), is marketed for use initially in controlling rat infestations. (PRNewsfoto/SenesTech, Inc.) (PRNewsfoto/SenesTech, Inc.)While the Bill is intended to address the vulnerability of wildlife to the lethality and environmental persistence of these SGARs used for rodent control, it also creates a challenge to pest management professionals (PMPs) who incorporate SGARs in their integrated pest management (IPM) programs. Absent the use of these SGARs, pest management will have to rely on other lethal and non-lethal tools, such as ContraPest’s fertility control. In testimony previously, it was estimated that the current use of rodenticides, these SGARs being a large share, in the state was worth approximately $100 million of product per year.
“ContraPest® can help fill the gap in integrated pest management (IPM). In extensive field studies, ContraPest has been shown to reduce rodent populations 60% to 90% beyond conventional means alone.  As PMPs adapt their protocols and practices to the Bill, we will work with PMPs to best incorporate ContraPest as they eliminate or limit the use of the now-prohibited SGARs,” said Kenneth Siegel, SenesTech’s CEO. “We believe that the PMPs will also see that ContraPest can be economically and practically beneficial to their entire practice, not just that affected by the Bill.”
“We have been building, and are now launching, a multi-pronged initiative to drive adoption of ContraPest in California,” added Dr. Steven Krause, SenesTech’s EVP of Sales and Marketing. “One, we plan to engage with the PMP industry on how ContraPest can be beneficial to their pest management business, as they adapt to the removal of SGARs in many circumstances. Two, we plan to increase our market awareness campaigns to the broader residential consumer, commercial and agribusiness customer bases. The passing of AB1788 represents a tectonic shift in the industry, and while the magnitude impact on industry practices and product deployments is unknown today, it is certain to bring more opportunities for proven, non-lethal tools such as ContraPest.”
About SenesTech  SenesTech is changing the model for pest management by targeting one of the root causes of the problem: reproduction.
ContraPest® is an innovative technology with an approach that targets the reproductive capabilities of both sexes in rat populations, inducing egg loss in female rats and impairing sperm development in males. Using a proprietary bait delivery method, ContraPest® is dispensed in a highly palatable liquid formulation that promotes sustained consumption by rat communities. ContraPest® is designed, formulated and dispensed to be low hazard for handlers and non-target species such as wildlife, livestock and pets, where the active ingredients break down rapidly.
We believe ContraPest® will establish a new paradigm in rodent control, resulting in a decreased reliance on lethal options. For more information visit the SenesTech website at www.senestech.com.
Safe Harbor Statement This release contains “forward-looking statements” within the meaning of Section 27A of the Securities Act of 1933, as amended, and Section 21E of the Securities Exchange Act of 1934, as amended and such forward-looking statements are made pursuant to the safe harbor provisions of the Private Securities Litigation Reform Act of 1995. “Forward-looking statements” describe future expectations, plans, results, or strategies and are generally preceded by words such as “may,” “future,” “plan” or “planned,” “will” or “should,” “expected,” “anticipates,” “draft,” “eventually” or “projected.” You are cautioned that such statements are subject to a multitude of risks and uncertainties that could cause future circumstances, events, or results to differ materially from those in the forward-looking statements, including the risks that actual results may differ materially from those projected in the forward-looking statements as a result of various factors and other risks identified in our filings with the Securities and Exchange Commission. Forward looking statements include, but are not limited to, our expectation regarding sales commitments, our expectation regarding the conversion of sales commitments and programs to revenue, our belief that our product is more humane, less harmful to the environment and more effective than traditional methods, and our belief that ContraPest will establish a new paradigm in rodent control without environmental effects of rodenticides.  All forward-looking statements contained in this press release speak only as of the date on which they were made and are based on management’s assumptions and estimates as of such date. We do not undertake any obligation to publicly update any forward-looking statements, whether as a result of the receipt of new information, the occurrence of future events or otherwise.
CONTACT:
Investor: Robert Blum, Joe Dorame, Joe Diaz, Lytham Partners, LLC, 602-889-9700, senestech@lythampartners.com
Company: Tom Chesterman, Chief Financial Officer, SenesTech, Inc., 928-779-4143 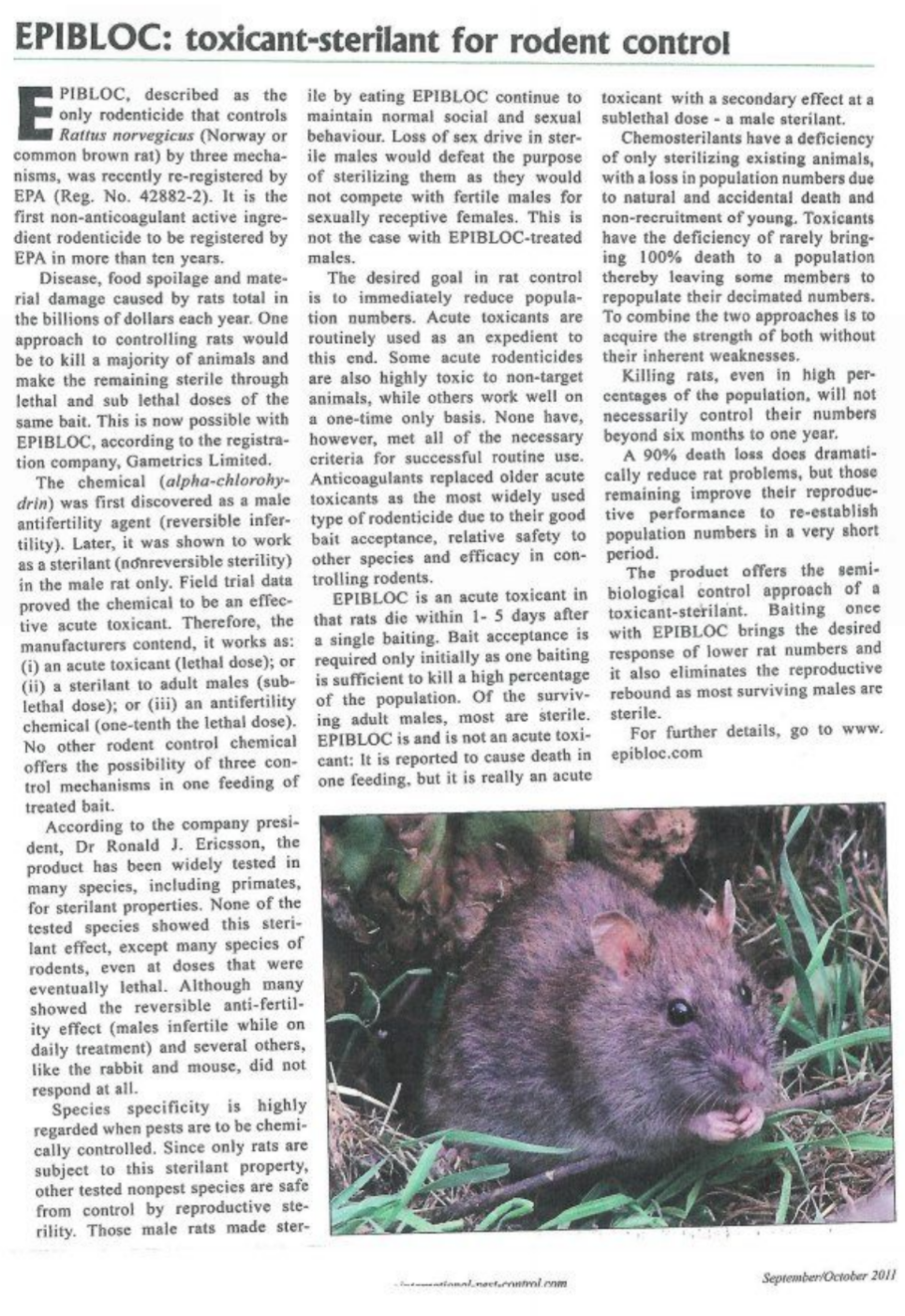